The entrance at Latrobe Oval and a statue commemorate Darrel “Doc” Baldock. The statue was officially unveiled on the 28th April 2014.
Darrel Baldock A.M. commonly nicknamed “The Doc” and “Mr Magic”, was an Australian rules football player, coach, and state politician. In 1966 he captained the St Kilda Football Club to its first, and to date only, premiership. In 1969, Baldock returned to Tasmania and captain-coached Latrobe to four consecutive NWFU premierships from 1969 to 1972. Baldock played 158 games for Latrobe before finishing in 1974.
Baldock is a member of the Australian Football Hall of Fame and has been upgraded to the status of “Legend”. He was also a handy cricketer, playing two first-class cricket matches, once for Tasmania and once for a Tasmanian Combined XI. After retiring from football, Baldock served in the Tasmanian Parliament for fifteen years. He died in 2011 and a State funeral was held at Latrobe. 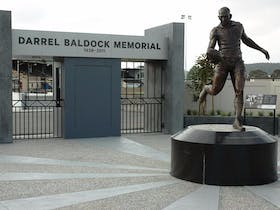